The Importance of Executive Functions 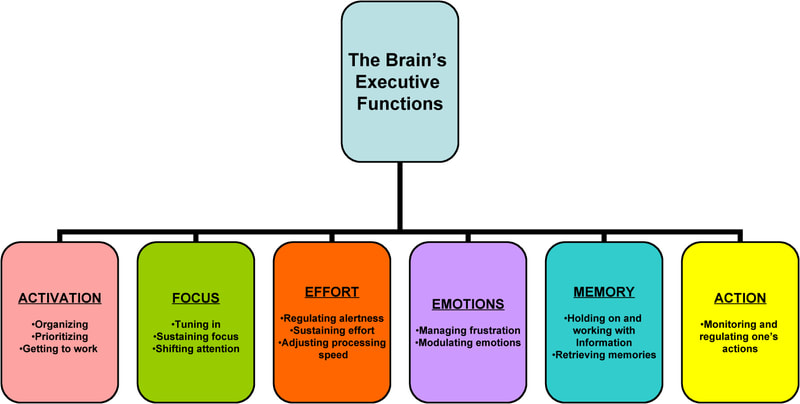 What is Executive Function?

In short, executive function refers to the mental skills that help you get things done. While there are many different definitions, I like this model to define the six underlying skills necessary to function at ones top potential (See Barkley's Model above).

More officially, The U.S. National Library of Medicine (2017) subdivides executive function into the following categories: inhibitory control, working memory, cognitive flexibility, relational reasoning, and logical reasoning. Essentially, executive function is the higher order brain activities that allow us to assess our current surroundings in a way that helps us plan for an unforeseeable future. There are nine models most widely accepted by researchers from varying fields that look to understand the development of this important function (Executive Function, 2017). Top down inhibitory control refers to the study of the mechanisms in the brain responsible for control, memory, selective attention, theory of mind and emotional regulation. The working memory model looks at the human mind’s ability to sort and retrieve needed information when applying to new experiences. The supervisory attentional system uses the concept of schemas to explain how responses occur. Lezak’s (1982) model is the most often cited explanation of the four categories of executive function: goal formulation, planning, carrying out goal-directed plans and effective performance. The self-regulatory model, coming from Barkley’s (2012) work, deals mostly with how we orient ourselves towards life goals. The problem solving model builds on the self-regulatory model but explains the mechanisms involved in solving both short and long term solutions. Additional models include those from Miller and Cohen (2001), Miyake and Friedman (2000), and Banich (2009).

But let's just agree to stick with the first model, yes?

Executive Functioning and the Young Mind

Barkley (2012) lists over eighteen definitions of EF, ultimately describing it as a set of neuropsychological processes (activation, focus, effort, emotions, memory, and action) needed to sustain problem-solving toward a goal. His is the research foundation in which I am most interested because his orientation is in education and counseling rather than in neurology or other related fields. Barkley believes in the flexibility of the human mind, and the efficacy of interventions used to build executive functioning skills in children, adolescents and teens. He was particularly interested in studying individuals with deficits in EF, including those with Sensory Processing Deficits,  Attention Deficit Disorder or Attention Deficit Hyperactivity Disorder (Barkley, 2017).

Unstructured, multi-age play. When children are allowed to structure their own play with others, they develop the ability to plan, strategize, negotiate difference, time manage, anticipate consequences, regulate emotions, breaks tasks into smaller chunks, make predictions, and take risks. The added benefit of multi-aged peers is that children develop emotional regulation and strengthen empathy. For more on this subject check out thee books listed in my "library."

Mindfulness.  Mindfulness is the concept of paying attention as a means of building “moment to moment awareness of thoughts, emotions, bodily sensations, and surrounding environment” (Mindful Schools, 2017). Shin, Black, Shonkoff, Riggs, and Pentz (2016) were interested in discovering whether there was a relationship between mindfulness and EF. They used the Mindfulness Attention Awareness Scale, the Self-Compassion Scale, and the Behavior Rating Inventory of Executive Function with over two hundred adolescents and found a positive correlation between the three scales. Those with higher levels of dispositional mindfulness, self-compassion, self-judgment, and self-kindness were more likely to also score high in EF proficiency. Whether or not training children in mindfulness practices and self-acceptance and awareness will also result in an increase in proficiency in EF is not determined by this study, but it is an important piece of information in justifying program design.

Psychosocial adjustment. Cassidy (2016) developed a research design to look for a relationship between healthy emotionally and behaviorally adjusted children and executive function skills. A five factor model was used that included working memory, shifting, verbal fluency, externalizing behaviors and internalizing behaviors. Of particular interest was that those who scored highest in the externalizing negative social behaviors also scored low in working memory and in verbal fluency. This information could be useful in designing interventions that build on student’s verbal ability and memory to support their social skills development.

Secure attachments. Findings from a small study found a positive correlation between secure attachments with both parents in children’s executive functioning (Meuwissen & Englund, 2016). The researchers summarized that involving parents in interventions designed for at-risk children will be of vital importance to their success. The concept of one caring adult has been studied at length and used to make policy recommendations to schools and after school programs. A relationship with a counselor can, in and of itself, provide an additional caring adult that will promote EF. Researchers from Child Trends (Murphey, Bandy, Schmitz & Moore, 2013) found the following:

Mentors. Children who have a connection to at-least one adult outside of the home are less likely to experience bullying and depression.
Engagement. They are more likely to finish tasks, demonstrate self-control, be interested in trying new things, volunteer, and be more involved
and interested in school.
Bonding. Children with secure attachments to an outside adult or mentor are more likely to feel a sense of connection to their primary adult
care-taker.
Well-being. The greater the number of important adults in the life of a child, the greater the child’s sense of well-being and optimism for the
future.

Skills training in group counseling. Research supports the use of skills training interventions to increase feeling of connectedness, behavioral and metacognitive skills, and specific organization skills. Bowers, Lemberger, Jones, and Rogers (2015) found that those students that had been through a specific Student Success Skills counseling intervention program were more likely to score higher on the Behavior Rating Inventory for Executive Function, the Child and Adolescent Success Scale, and on the Discovery Education Assessment than those who did not go through the training. Studies have been repeated for various sub-populations including those students defined as at-risk for academic failurel (Lemberger, Selig, Bowers, & Rogers, 2015).